Just a quick update today before I head back to looking after children and enjoying Christmas cheer beer. :)

I have assembled and base-coated all the Dystopian Wars figures that I picked up, and purchased a few more. It turns out my FSA force seriously outpointed the CoA, then a friend gave me another large FSA landship! I will supply photos soon.
I have also played a game of Dystopian Wars. It is very similar to Uncharted Seas, which I played a fair bit of when it first came out. There are quite a number of additional rules, however, for things like little fighter wings and shield generators which I have not quite fully got my head around yet!

School holidays gives me time to make a big mess in the shed, which means terrain making! I have already done a bunch of extra pieces for my jungle terrain, some trees more appropriate for an orchard, and a forest full of christmas trees. A full post and photos for each of these is coming.

Cheers,
Nathan
Posted by Nathan at 10:13 AM No comments:

I went to visit my friend Jason at Good Games Newcastle on the weekend. The store has just celebrated its first birthday and they had a whole heap of new and interesting stock in as part of a sale. As well as heaps of Malifaux and Infinity, Jason also had a huge pile of Dystopian Wars figures and terrain.
Now, I am a big steampunk fan, and the Dystopian Wars game and miniatures are right up my ally, but I had so-far resisted buying any as I had bought in big to Uncharted Seas and now never play it. However, my will power was low this week, and I somehow convinced myself that other people would play Dystopian Wars if I supplied them with an army... 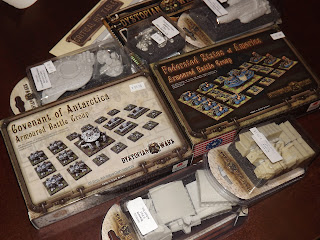 A review of the figures and game will come soon!
Posted by Nathan at 12:36 PM No comments:

How I... Made My Jungle Terrain

A while ago I posted some pics of the jungle terrain. Today I am going to go over how I made it. It was a relatively straightforward project, and I was able to create enough terrain to fill a 6'x4' table in about a week of afternoon work.

I had been collected the bits for my jungle terrain for a very long time. I had plastic grass tufts that I picked up sometime around the year 2000, and Easter Island heads that were MacDonalds promotions back when the film Night At The Museum came out (2006, apparently). In fact, it was my growing collection of bits that prompted me to finally get the terrain done.
In the end I had a good pile of fake grass and a variety of other fake plants, some sticks and twigs, flock, sand, and pine cones. I also had a heap of  old boardgame boards, which I used as the bases for my terrain. 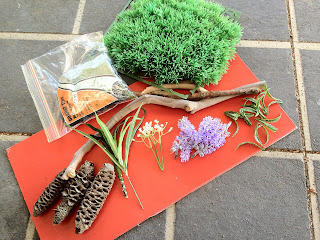 As far as tools, I stuck with the classics - clippers, scalpel, super glue, wood glue and paint. 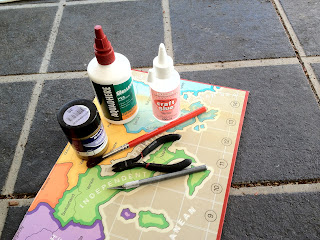 I was pretty happy with the colours of the fake plants and so made the decision that I would not be painting them. The sticks and twigs were also appropriately stick-coloured! I gave the Easter Island heads an undercoat of black and a couple of dry-brushes of grey and they came up great, too.This meant I could cut and paint the bases before applying the actual jungle.
The bases were cut into irregular ovals between three and eight inches long and of varying lengths. I wanted some terrain to be narrow "barriers" and others to be "clumpy". I started cutting the game boards with the scalpel, but in the end scissors were easier and quicker. All the bases were then given two coats of brown paint (from a tester pot bought from the local hardware). I was worried that the board would warp with a lot of paint and glue, but they have turned out fine. 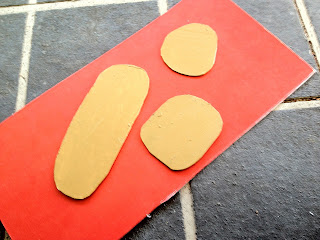 This was the fun bit. I took all the plants and sticks and other bits I had and started gluing them to bases in a semi-random fashion. My goal was to have a variety of plants and other objects on every base, and to try and vary the height and width of objects used. This variety helped create a natural look to each jungle base. I usually began with a single central feature, such as a tree trunk (stick), stone head, or large plant. Then I slowly added other plants until the base was filled.
I kept a few miniatures of different scales to hand, so I could also take a look at how the terrain looked "in play". It also allowed me to leave gaps and clearings for models to stand in.
All the material was attached to bases with wood glue, though I did use a few dabs of superglue to keep some plants in the right spot while the wood glue dried. I would have used my hot-glue gun, but it went missing after a terrain-making day for my local club and I haven't got around to getting a new one.

When the glue was dry I dribbled more wood glue around the bottom of all the plants and applied a mix of sand and flock. The goal was to hide the plastic tabs from the bottom of the plants and really make sure everything was thoroughly glued to the base. The effect was mounds of dirt and plant debris piled under the shrubs and bushes, and I think it looks pretty good. 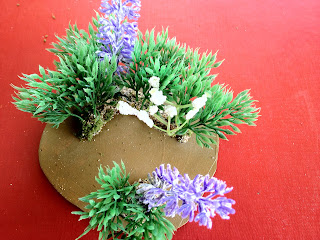 I decided the bases were finished at this point, though I am in two minds about whether to flock / sand the whole base. As they are currently, the brown works quite well and actually matches one of the cloths I use on my game table (a total accident!). I am also concerned that the bases will warp if I go apply glue to the whole thing.

And that's it. An entire table of jungle terrain built over a few leisurely days during my holidays. 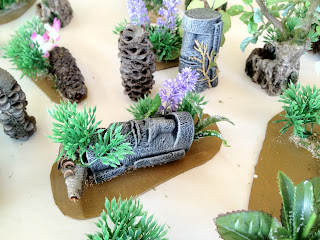 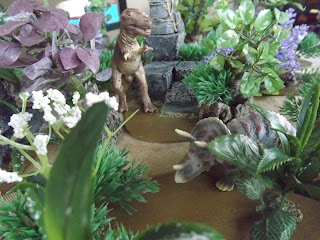 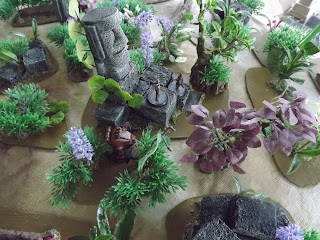 Email ThisBlogThis!Share to TwitterShare to FacebookShare to Pinterest
Labels: How I..., Jungle, Terrain

I currently have a four 28mm Hordes of the Things armies on my workbench. They have been assembled and are now awaiting paint. I have been building armies for HotT from my unused Warhammer Fantasy Battle miniatures.
Here is a quick snap (from my mobile and not of brilliant quality) of my Goblin army.

Posted by Nathan at 7:03 AM No comments:

So, a few months ago I moved house and began to sort through all my models, miniatures, terrain and other gaming paraphernalia. I had a hug box of miniature bits (don't we all?) that was next to useless as I could never find anything I was after, and didn't remember half the things that were in there. So I invested in a bunch of gift boxes and began sorting! 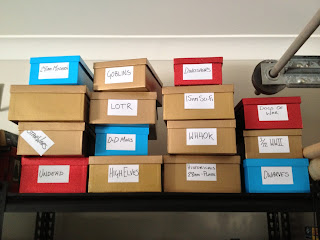 These boxes are filled with my unused, unassembled and/or unpainted figures. There is actually another pile of boxes just to the left of these, with more figures (Warmaster, Flames of War and the like). I used old business cards as labels which worked great for about a week, but now they are falling off. I will have to use something other than a glue stick to attach them in the future!
How do you organise your miniatures?
Posted by Nathan at 6:47 AM No comments: 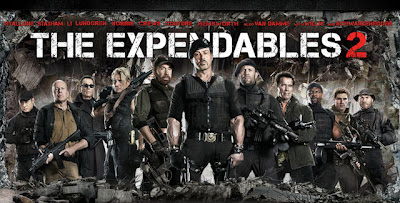 Okay, I will keep this brief, because, honestly, there isn't a lot to say. If you grew up on a steady diet of action movies in the 1980's and early 90's, then you have probably already charged to the cinema to see this set-piece action extravaganza, filled with so much CGI blood splatter that it becomes tedious. The plot is pretty basic - Stallone and co meet a bad guy (Van Damme) who does bad stuff, so they go out to get revenge.
The real joy in this film is the unashamed fan-service. These guys (that is, the film makers and stars) aren't taking this seriously - they know who their target audience is and just play everything to them. All the great action heroes are here, all the famous lines are delivered, and the action scenes are loud, blood soaked and full of the dramatic nuance you have come to expect from John Rambo, John McClane and John Matrix... What is it with all these action men characters being called John?
Stallone acts his heart out, Statham plays himself as usual, Willis is more arrogant than I really like and Schwarzenegger's performance is wooden to say the least. Van Damme is a real bastard that you enjoy seeing pummelled and the other supporting cast members do an admirable job at chewing gum and kicking arse.
This isn't a great movie, but I never expected it to be. And perhaps that is why I loved it.

Posted by Nathan at 8:34 AM No comments:

It's a jungle out there!

With the school holidays comes the opportunity for me to make a great big mess, pulling out the things I don't normally have the time to, and dig into some terrain making. Rummaging through my terrain-bits-box I found a whole heap of stuff I had squirrelled away a very (very!) long time ago with the intention of making a jungle themed table. Better late than never, I suppose!
Below are some "action shots" of the finished terrain. I will do a post on how I constructed the terrain very soon.

Posted by Nathan at 2:35 PM No comments:

Nathan
Hi, I'm a writer, teacher, husband and father. I am search of a better, more productive life where I work smarter in order to spend more time with the people I love doing the things I love. Join me at http://smarterhappier.com